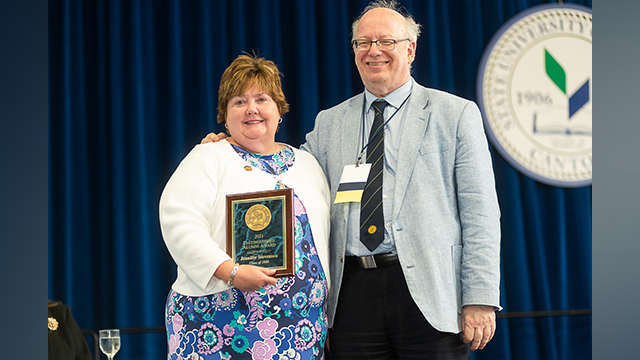 CANTON, NY (WWTI) – The State University of New York at the Canton Alumni Association has selected a new recipient of the Distinguished Alumni Award.

The association named Jennifer Stevenson, realtor/owner of Blue Heron Reality in Ogdensburg as the recipient of the honor. She received the award at the recent college graduation weekend celebration. The Distinguished Alumni Award is selected annually by a committee of the College Alumni Association Board of Trustees to recognize outstanding achievement and ongoing contributions to the college.

Stevenson graduated in the class of 1988 when she earned her associate’s degree in accounting. She served as the 2020 President of the NYS Association of Realtors and Past Chair of the St. Lawrence County Board of Realtors.

‘Once Upon a Mattress’ is coming to the Potsdam Theater

Stevenson said she didn’t follow a traditional academic path of taking a few years off to decide on a career path. She credited the late Professor Emeritus Walter R. Christy, JD, for her success.

“Anyone could do what I do if you had the training and background I got here at SUNY Canton,” Stevenson said. “I think the real estate education I received here, with a lawyer teaching the class, was far superior to many.”

“I’ve had the good fortune to visit the campus several times to see how SUNY Canton has grown and changed,” Stevenson said. “When I was approached about joining the board, it seemed like the right thing to do to give back to the college that has allowed me to have the career I love.”

More information can be found on the SUNY Canton website.