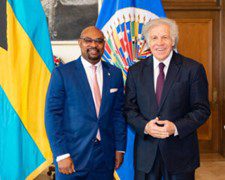 The Organization of American States (OAS) said the Bahamas’ new permanent representative, Chet Donavan Neymour, presented his credentials to OAS Secretary General Luis Almagro on Friday during a ceremony at the headquarters of the Bahamas. OAS in Washington.

“I have the utmost confidence in you, and it would not be surprising to see you continue to support the voluntary representation of the predecessors you worked with, namely Ambassador Dr. Elliston Rahming and Ambassador Sidney Collie, who have promoted the four pillars of this Organization with deep commitment,” said Almagro welcoming Neymour.

“I look forward to working with you and your government for the benefit of the Organization of American States and the people of the Americas,” he added.

Ambassador Neymour emphasized his “unshakable belief in the necessity and great promise of the Organization of American States” and said he was “honored and grateful” to serve the Bahamas as Permanent Representative to the OAS.

“There’s still more we need to do as a collective, with purpose and in a hurry,” Neymour said. “It is therefore imperative that we ensure that this organization responds to the real needs of every citizen of our society, especially the most vulnerable.

The OAS said Ambassador Neymour has held various leadership positions in the Bahamas.

In 2001, he became the Permanent Representative of the Bahamas to the United Nations.

Previously, he was Deputy Chief of Mission at the Embassy of the Bahamas in Washington and Acting Representative to the OAS.

During his 26 years of public and foreign service, Mr. Neymour held various high-level positions, including as Deputy Director of Economic Planning in his Government and Multilateral/International Financial Institutions Sections, respectively, in the Ministry of Finance, and as Deputy Chief of Mission/Chargé d’Affaires at the Bahamian Embassy in Washington, D.C. He was the founding secretary of the Bahamas Securities Council (now the Bahamas Securities Commission) and has been integral in the formulation of his country’s Ministry of Foreign Affairs Act (2014) and other high-profile laws.

Born in 1967, Mr. Neymour earned a Bachelor of Science in Business Administration and Economics from Elmira College and a Masters in Economics from American University, both in the United States.

He is married and the father of four children.