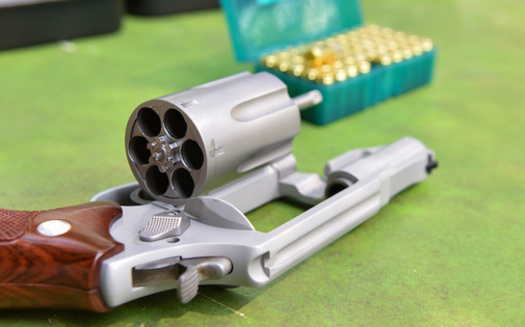 Sen. Mitch McConnell, R-Ky., the Minority Leader, said Tuesday he would support a bill that follows the agreement.

According to Gun Violence Archive data, there have been 246 mass shootings this year. (Photo by Adobe Stock, via PNS)

Kym Craven, executive director of the National Association of Women Law Enforcement Executives, said her group advocates measures to prevent people with a history of violence or domestic violence from getting guns.

“We have a lot of research at our fingertips to reflect on and gather,” Craven said. “And create programs and strategies to reduce the number of gun deaths that occur in our country.”

Last week, U.S. House lawmakers passed the Protecting Our Children Actto raise the age of purchase of semi-automatic rifles from 18 to 21 and create federal laws against gun trafficking, among other reforms.

Only one Kentucky member of the chamber, Rep. John Yarmuth, D-Louisville, voted to approve the bill. In 2020, the Commonwealth had the 13th highest firearm death rate in the country, according to the Giffords Law Center.

Craven pointed out that several states have struck a balance between responsible gun ownership and policies such as implementing universal background checks and closing private sale loopholes.

“If we look at some of the states that have the strongest gun laws, and when you combine that with programming, they’re among the least gun violence-prone states,” Craven reported.

Fredrick Thomas, president of the National Organization of Black Law Enforcement Executives, said that for those who have chosen to serve their community by becoming a police officer, it’s a moral issue.

“I can’t ignore underserved communities, who see loved ones turned into victims in the blink of an eye,” Thomas pointed out. “I can’t ignore the fact that federal inaction has brought us to this horrible inflection point.”

Mass shootings occurred every day in June except one, in Kentucky and more than a dozen other states, according to Gun Violence Archive.

The news of the Alliance zone in brief for June 21