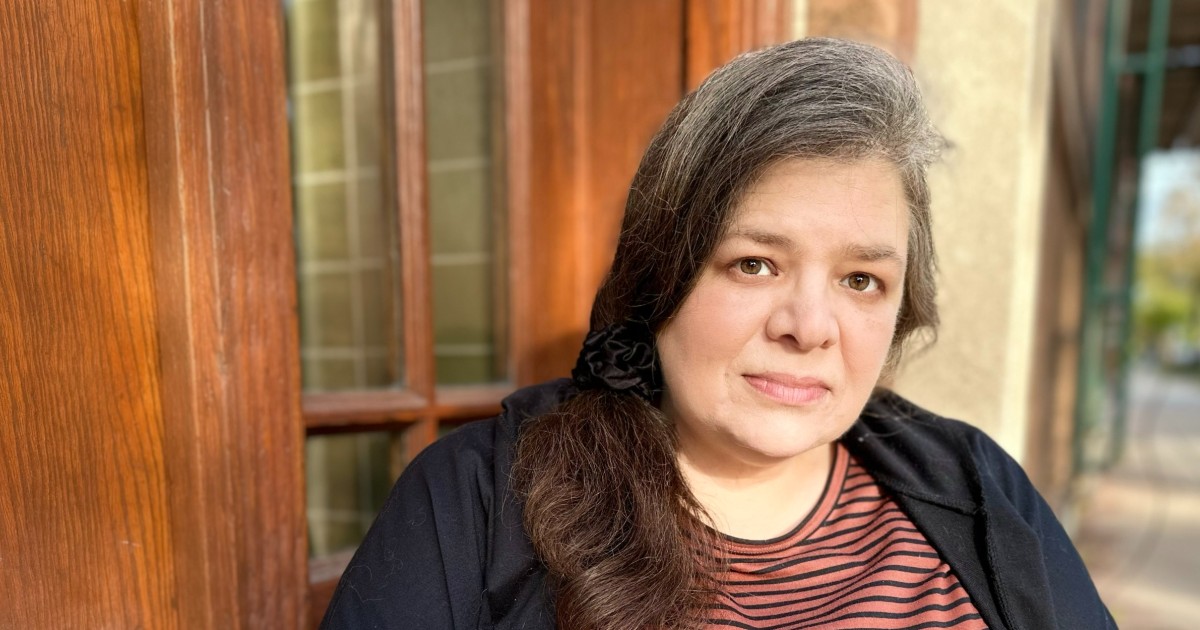 It was eight years ago. Caughlin earned a master’s degree and landed her dream job. For the past year, she has been teaching English and citizenship classes to immigrants and refugees at Heartland Alliance, one of the city’s largest social service agencies, with offices throughout Chicago.

“I was beyond thrilled when I got this job,” said Caughlin, of Albany Park. “I had seen the signs for Heartland. I had known people here and there who worked at Heartland.

Caughlin, 54, took a pay cut from her past career because she wanted to help immigrants “have agency in their lives, have fulfilling lives, have wealth to better themselves, make better for their children and enjoy freedoms that we take for granted.”

She said she liked the job, but the salary, at just under $40,000 a year, put her in a precarious financial position. Her utility bills have risen about 60% over the past year, grocery costs are rising with inflation, and the condo building she lives in requires a special appraisal for repairs. Caughlin also worries that she can’t find a way to “put aside a little bit each year to take care of my health.”

“It’s death by a thousand cuts,” Caughlin said. “The most frustrating thing for me is that I’m a frugal, thoughtful person on a monthly budget…and I’m grateful to have a full-time job with benefits.”

Caughlin is one of more than 500 social service workers in a contract battle with one of Chicago’s oldest and largest social service nonprofits. She and others say low pay, long hours and understaffing across the organization present an irony for hundreds of Heartland employees: They feel themselves qualified for the organization’s services. non-profit.

“It just seems incongruous that I have to fight for the basics of life when this organization wants to lift people out of poverty and promote equity,” Caughlin said.

Leaders of the United Human Services Workers — a unit of the National Organization of Legal Service Workers/UAW Local 2320, which represents Caughlin and his colleagues — said Heartland devalues ​​its employees at a time when service workers are more crucial than ever.

“Without the workers here and the commitment we have to the people we serve, this organization could not exist,” said Felicia Turner-Suarau, housing resource specialist at Heartland and one of the union leaders.

Turner-Suarau, 61, who has worked at Heartland for 12 years, said the union’s last contract expired this summer and negotiations were not going well. The main sticking point is pay rises for the union’s more than 500 members.

The union’s latest offer was a 5% raise in year one, a lump sum raise of $3,000 for all members to ensure fair raises for low-income workers in year two and 5% in year three, plus bonuses for different groups of workers.

According to union members, Heartland presented its best final offer on Monday: a 4% increase in the first year of the contract, followed by 3.2% in the following two years, plus bonuses for different groups of workers.

Turner-Suarau said she and other union leaders are hearing from members and deciding whether to strike. She said management’s final offer does not cover last year’s inflation or recognize the important work of union members during the pandemic. She also said management’s refusal to offer back pay from the new contract period, which would have started in July, has been a point of contention with union members – many of whom have master’s degrees and most of whom earn between $35,000 and $50,000.

“No one came to this organization to get rich, but [top executives] are,” Turner-Suarau said. According to Heartland most recent 990 filingCEO Evelyn Diaz earned over $350,000 and five other executives earned over $200,000.

Turner-Suarau also said management sent a letter to workers suggesting union leaders were spreading false information to trick members into voting for a strike. She said the management’s claims were false and that discouraging a strike was a “campaign of fear”.

Heartland Alliance did not accept an interview. Instead, officials sent out a statement: “We greatly appreciate our staff’s commitment to our mission and the life-changing support they provide to those we serve. Like other nonprofits, our primary funding comes from public and private grants, and we operate within the budgets of those grants. We have already secured additional funding for staff salaries from several of our funders. In addition, we have promised the union, in writing, to continue advocating for increased grant funds for staff compensation, which will also support staff recruitment.

Founded by social reformer Jane Addams in 1888, Heartland Alliance — then called Travelers and Immigrants Aid — has expanded its services beyond the immigrant population over the years. It now provides health care, housing, violence prevention and legal aid to various vulnerable populations in the city to the tune of $177 million, according to its annual report 2020.

According to his websiteHeartland also operates in seven countries around the world, serves over 500,000 people each year and employs over 1,600 workers.

For Michael Brieschke, a housing case manager who started at Heartland in 2017, expansion comes at a price — not just for workers, but for the people they help.

“People leave because they are not paid enough; they take higher paying jobs,” said Brieschke, 59, who says he earns about $47,000 a year after 12 years in this field.

The turnover, he added, has resulted in understaffing, leading to more work for employees and delays and less service for vulnerable populations. He said that on his team, which targets homeless HIV-positive people, two vacancies had been open for more than a year and about 40 participants had not had a consistent case manager for more than a year.

“How can we expect our participants to be successful if they don’t have a consistent person to accompany them on their journey?” asked Brieschke.

He added that management often touts new funding streams, but these are often for new programs.

“I think it’s great if we can expand our programs,” Brieschke said. “But how can we consider expanding our programs when we can’t even hire enough people to run the programs we already have?”

Caughlin, the ESL teacher, said that ultimately these funding issues and financial decisions are the job of the principal.

“If they can hold me accountable for my work, workers can hold management accountable for the financial health of the company,” she said, adding that her fight is more for her colleagues who earn even less than ‘she.

While awaiting a new contract this week, Caughlin began training for a part-time job conducting online language assessments for English learners. With the gig, she said she expects to work six days a week until her financial situation improves.

She added: “I don’t see things getting any better – every month I sink into a deeper hole.”

Esther Yoon-Ji Kang is a reporter in WBEZ’s Race, Class and Communities bureau. Follow her on Twitter @estheryjkang.