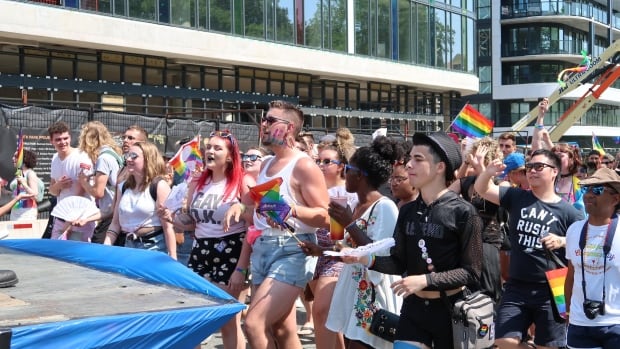 The Halifax Pride Festival is due to run from July 14-24, but when the Gay Alliance for Equality was formed in May 1972, the quest for this kind of visibility was a radical undertaking.

Tom Burns, the organization’s first president, said it was inspired by the Stonewall riots in the United States. The 1969 protests at the Stonewall Inn in New York are considered a landmark event in the gay rights movement in North America.

Burns spoke with CBC Main Street host Jeff Douglas on the need at the time to fight discrimination against homosexuals and increase their visibility.

This is a condensed version of their conversation that has been edited for clarity and length.

NS Main Street14:43Tom Burns felt invisible in Halifax in 1972, so he helped found the Gay Alliance for Equality

In May 1972, homosexuals in Halifax were organizing. A month later, the Gay Alliance for Equality was created. Host Jeff Douglas spoke with the group’s first president, Tom Burns, about what it was like to be gay – and to feel invisible – half a century ago.

In Rebecca Rose’s book Before the parade she has a newsletter from November 1972 and it begins, “This letter is to inform you that Halifax has now entered the ever-expanding movement for gay liberation.” How acutely did the community here feel the need for this release?

At that time most of us were invisible and I think that’s why it started. Invisibility was a good thing and it was a bad thing, but we said that homosexuals are there and that we exist.

We knew there was discrimination against gay people and we wanted to highlight what exactly was going on. For me personally, it was a movement to help other gay people come out. To not have the trouble I had to go out.

Tom, can you describe that?

So we said to ourselves, we know that there are homosexuals. We met them, we talked to them.

So we thought, well, why not organize ourselves to help them out and try to end the discrimination?

What do you remember about how you were chosen to be the first president of the Gay Alliance for Equality?

Basically because no one else wanted the job.

I’m for a penny, I’m for a dollar. I have to do something so I chose to be the first president.

Why don’t we talk a bit about why no one wanted this job?

They were afraid to go out publicly; afraid that they will appear on the radio or television. I did a radio interview about a year later, and I appeared on television to talk about homosexuality [phone] line.

In addition, we spoke openly to Dalhousie. We talked to Saint Mary’s University.

A few brave people accompanied me to Dalhousie. By the time we arrived at Saint Mary’s, no one wanted to come. They all volunteered and before the event, they all bowed out.

I ended up going there on my own.

You mentioned the phone line. Can you tell us how it was and who it was for?

A few of us had worked on the general help line on people who phoned to discuss their issues and so on.

Unfortunately we were operating 7-10pm seven days a week. We would have liked to offer it longer but we didn’t have enough staff for the lines.

I hope we saved some people’s lives. To let people know they weren’t alone. Knowing that not everyone hated them, including God. It was an important thing, that they were not alone.

I understand that the alliance was also fighting in the beginning to have sexual orientation encoded in the human rights code?

Yes. And ask the human rights commission to tell us: “Oh, you are not discriminated against. No one discriminates against you.

Do you still celebrate Pride?

I go to the parade when there is one. I’m very proud of it.

I never thought I would live long enough to see a pride parade.

Gun safety ‘wrapped in a mental health bill’: An overview of the health provisions of the new law

Online cash advance: what is it and what are the alternatives