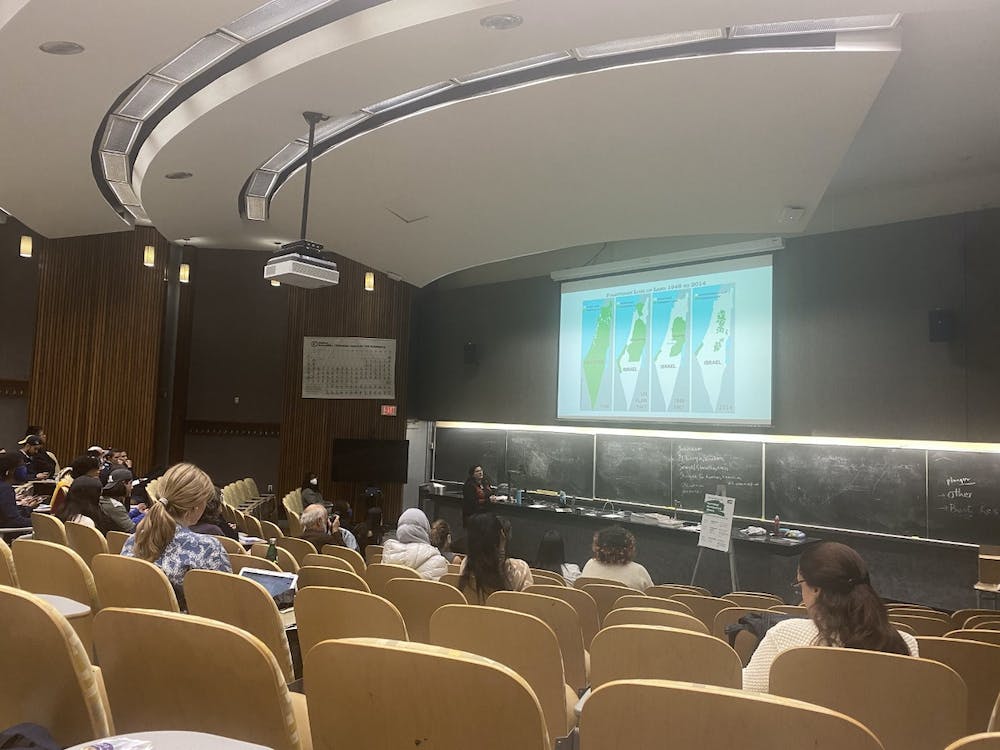 Duke Students for Justice in Palestine and the Duke Arab Students Organization co-hosted a series of speaker events from March 29-31 for Israeli Apartheid Week.

“Palestine 101” presents the history of Palestine through a “colonial perspective”

The first conference, titled “Palestine 101” and led by Alhasan, traced the history of Palestine and “the loss of Palestinian land over time” through a “colonial perspective”.

Alhasan explained that whenever a student asks her about Israel, she responds: “Israel started when Britain, as the imperial colonial power, gave Israel land that neither belonged to the Britain or Israel, and in doing so deprived the Palestinians of their right to self-government and self-determination – and to this day Israel continues to colonize the rest of Palestine.

She likened Zionism to manifest destiny, as she claimed both used religion to justify “colonial projects” in which “God is a real estate agent who has empowered white people to have all the land they they want at the expense of indigenous peoples. .”

Alhasan then presented a quote from Palestinian author Ghassan Kanafani: “They steal your bread and give you a crumb. Then they ask you to thank them for their generosity. O their audacity! She said that quote resonates with Palestinians who are led to believe that their calls for land are excessive.

“We hardly ask for anything. We claim our lands and you did not give them to us. You literally gave us crumbs,” Alhasan said. “Remember settler colonialism is about land. We are asking for our land, it is our land. This is where we live and we deserve to be back in our country. And we will be back.

Alhasan then described conditions in present-day Palestine, including Israel’s identification system for Palestinians and its denials of family unification, which she considered a “form of psychological warfare” through the “separation of families and loved ones and denial of marriage”.

Hammouda, a peace fellow at the Duke-UNC Rotary Peace Center, opened the second event in the series, “Permission to Tell.” She spoke with Emmy-nominated journalist Shihab-Eldin about navigating journalism careers as people of Palestinian descent.

Hammouda asked Shibab-Eldin to share his perspective on media censorship of the Israeli-Palestinian conflict.

Get The Chronicle straight to your inbox

Shibab-Eldin has worked for several mainstream news outlets, including The New York Times and Vice, and said he felt heavily censored when covering events related to the conflict. He remembers going to the West Bank to film a documentary for Vice and seeing a mother and her children forcibly evicted from their home by settlers who claimed the property was a Jewish synagogue.

“They were throwing this boy out of the house, over the fence; they had the mother locked up, the mother is knocking on the door – we are filming all of this,” Shibab-Eldin said.

Shibab-Eldin planned to use this scene for the introduction to the documentary. However, the final cut did not include the scene at all, and instead only included a voice-over stating that there were “massive casualties on both sides” of Israel and Palestine.

“It was very clear that they were trying to erase the disproportionate power dynamic, which I think is the most essential part of the context you need to better understand reality,” Shibab-Eldin said.

Shibab-Eldin mentioned how the Russian-Ukrainian war exposed the “obscene double standards” of how the resistance is characterized by the media. He wondered why the world held Russia responsible. “Is it because they invade and violate [Ukraine’s] sovereignty? Or is it Western hegemony? He asked.

“It’s a matter of geopolitics. It’s impossible not to see what’s going on, even if you’re not Palestinian,” Shibab-Eldin said.

He contrasted the criminalization of “any movement that attempts to hold Israel accountable” with governments and social media companies currently employing boycott, divestment and sanctions strategies to hold Russia accountable for their aggression.

Shibab-Eldin said this current pro-Ukraine narrative gives him hope that the “impunity” these actors have enjoyed will be exposed.

“They’re going to be held to account for that disparity,” Eldin said. “I think it can help not only the Palestinian cause, but it can help oppressed people around the world, especially Israel and Palestine, to find bases. »

The main panel discussed community and media activism in the Israeli-Palestinian conflict.

“We welcome a respectful discussion of the Israeli-Palestinian conflict, but we will not tolerate direct targeting of the entire Jewish community,” the leaflet said.

The event was pushed back in early March by Duke Student Government senators when SJP first requested funding for speaker fees. Senators who opposed funding the event referenced some of the same tweets displayed in the flyer.

El-Kurd addressed the flyer and criticism directly, noting that he generally expects backlash when he comes to speak to universities. He cited the editorial published in The Chronicle before his visit which suggested his comments were aimed at students “who have ethnic ties to the land of Israel.”

“A person who has never been on the other side of a gun, tear gas, anything – who has never experienced ethnic cleansing, who has never seen their family dragged through the streets – s felt endangered by my presence,” he said.

These accusations of anti-Semitism, he added, addressing the student activists present in the audience, come from those who “are only interested in backing you into a corner, waving their finger in your face and to make you defend yourself so that you look guilty in front of others. an audience that doesn’t understand the cost,” El-Kurd said, referring to the flyer.

Alhasan pointed to local activist groups and ongoing pro-Palestine movements, calling on activists to be “strategic, smart and organized”.

“As we sit here, Palestinians are still being evicted from their homes, forced out of their homes. And I am a Palestinian like many of you in this room, forced to live in the diaspora and cannot return to my land, not even to visit,” Alhasan said. “But our Palestinian will and steadfastness cannot be broken.”

Shihab-Eldin stressed the importance of “speaking truth to power”.

El-Kurd echoed this. “We shouldn’t be spineless,” he said. “House thefts were called evictions. Small children who were shot at in the street were called incapacitation. And it was all perfectly legal. Which leads me to ask the question, who has the right to tell?

Preetha Ramachandran is Trinity’s junior and senior editor of the 117th volume of The Chronicle.

Milla Surjadi is a sophomore at Trinity and the editor of college news for the 117th volume of The Chronicle.

Katie Tan is a sophomore at Trinity and editor of the 117th volume of The Chronicle.