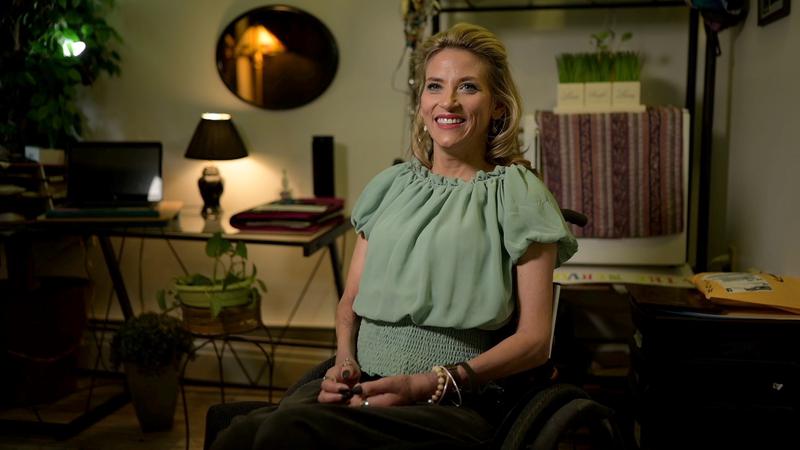 The series, dubbed #IGotThis, focuses on the connection between disability and mental health and how people are finding ways to stay positive.

“We talk to all kinds of interesting everyday people from Saskatchewan. They have a physical disability and they mentally talk about their tough times,” Jellicoe said. “They also talk about ways they’ve found to feel better.”

Gabrysh, for example, helps others improve his own mental health.

“She’s had some dark and depressing times and days and months, but she’s such a go-getter and she’s always had such a positive attitude,” Jellicoe said. Jennifer Jellicoe tv series 3

Gabrysh was paralyzed 15 years ago after jumping to catch a thrown football while having fun at a pool party. She landed in the shallow end of the pool in a foot of water, shattering two vertebrae.

“She was in her prime. Popular, outgoing, athletic and working and living in Regina,” Jellicoe said.

Although she felt no pain and thought she would return to the party later that evening, Gabrysh instead learned that she would never walk again.

Now, after participating in several medical trials and undergoing a nerve transplant, she can move her shoulders and biceps and pinch the thumb and index finger of her right hand together.

Gabrysh returned to Star City in order to get better care and be close to his family.

“She’s had some very difficult and very dark times, as one can imagine, over the years, especially with health issues like pressure sores and broken bones,” Jellico explained.

Gabrysh can spend time alone but is unable to transfer between her bed and her wheelchair and needs assistance, which she usually receives from a caregiver. Finding reliable help is a challenge, and Gabrysh has had more than 100 over the past 15 years.

Some didn’t bother to show up for work in the morning, leaving her confined to her bed and unable to get up even to eat.

Coping mentally is a huge challenge, but through determination and technology, Gabrysh has found ways.

She loves volunteer work and gives her time freely to groups and councils and in return reaps the mental benefits of helping others.

“You have to keep your mind active in every way possible, and she does. She has parents who take her fishing, who set her up with a super cool quad chair that she does all-terrain through snow and water and through ditches. She’s able to make that work,” Jellicoe said.

Using stories like Gabrysh’s is the goal of the #IGotThis series, beginning its third season on March 23, airing on AMI Wednesdays starting next Wednesday.

Jellicoe, as creative director at Honey Cut Studios which produces the series, is able to help tell the stories.

“Sharing his story will hopefully connect with someone who is listening and maybe give them ideas and encouragement to keep going if they’re feeling down. That’s the whole point of the show,” said she explained.

The series gives voice to people who have not felt heard in some of their struggles.

Honey Cut spoke to nearly 50 people about their struggles with disability and how it affected their mental state.

“It was difficult. People talked about suicide. They talked about the darkness of depression, there were hard times. Some of them opened up about it and some of them said, I haven’t thought about it in years,” Jellicoe said.

Despite the intense emotion and pain that is remembered, Jellicoe said many people find the experience almost cathartic. They feel better and better measure the extent of their achievements.

Jennifer Gabrysh stars in the eighth and final episode of the series.

Why EDR is not enough to protect your organization