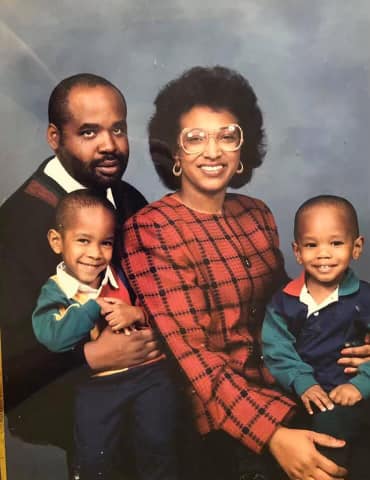 Debra Robinson remembers her legacy of larger than life love

Friday morning at the Greater Union Baptist Church, hundreds of community members filled the shrine to honor the life of Debra Kawee Robinson. Tributes of humor, grief, love, admiration and awe built on each other as friends and family said goodbye.

Born Debra Kawee Goff, the Oklahoma native left a larger-than-life legacy on the world around her.

On campus, Debra and Greg have become an unstoppable force. They championed community initiatives and pioneered student organizing efforts on their campus. Together they created and launched the Student Involvement Association, building a legacy and lifelong friends along the way.

A brilliant accountant and trailblazer, Debra helped launch the Tulsa chapter of the National Association of Black Accountants. Meticulous and determined in her work, she fought to create opportunities for other aspiring young black accountants. Along with business partner Ambrose Sims, Debra started a corporate sponsorship program to provide scholarships and job opportunities.

Over more than a decade, these efforts have raised more than $1 million and found jobs for more than 500 young black accountants.

Debra Robinson’s inspiring career was cut short, however, when she was diagnosed with multiple sclerosis.

The disease progressed rapidly, and doctors’ prognosis for Debra was grim. But Debra’s strength, faith and undying love for her family kept her going.

As they valiantly battled illness while raising their two sons, Setlah and Gregory II, the Robinson family faced yet another tragedy. Gregory Robinson, Sr. passed away suddenly and unexpectedly. Now a single mother battling a debilitating illness while caring for her two children, Debra could have easily succumbed to grief.

Instead, she summoned an almost superhuman strength that manifested only as love.

At her place celebration of life on fridayalmost everyone who stepped on the catwalk reflected on her otherworldly love and strength.

Thelma Chichester, who befriended Debra during their time at Langston, spoke of the “gifts of love” Debra gave.

Chichester recalled how Debra welcomed her into the Robinson family for school holidays and vacations. She remembers feeling at home among Debra’s loved ones.

“Kawee was a quiet soul,” Chichester said, “and though his love was private, it was nonetheless great.”

As Debra’s illness progressed, it became increasingly difficult for her to walk, then to move, and later to eat on her own. But this subtraction of Debra’s physical abilities, her niece Natalie Sims recalling the mourners, did nothing to diminish her spirit.

“It’s easy to look at the limitations she had on her body and make her life tragic,” Sims remarked. “This is not the case.”

Sims, an artist, spoke about how Debra was a conduit for her own creativity. Sims said Debra “always made room” for her to express herself authentically.

“It’s one thing to be alive, it’s another to live with intention, and that’s what Aunt Kawee did.”

In a eulogy to his mother, Greg Robinson II described his mother as a “warrior”, who endured every ounce of pain she faced in order to “make sure her sons were okay”.

Robinson began his remarks with a reference to Scripture, remarking that “to be absent from the body is to be present with the Lord”.

Often this verse is used in reference to death. But, Robinson said, with her mother, it was different. It was impossible to make sense of his presence, his peace and his love which simply seemed larger than life.

“Mom was just too fat,” he said, recalling a conversation with his brother Setlah. “And she was because mom was given the gift of being absent from the body in life.”

“She had the gift of being present with the Lord in life,” exclaimed Robinson.

If there’s one thing the enormity of Debra’s love should teach us, Robinson said, it’s that we can’t just focus on being loved.

We need to, as Debra did every day, focus “on love” instead.