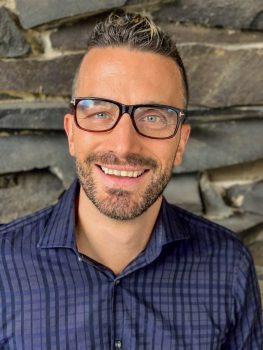 When art therapist Michael Willen grew up in Boulder, Colorado in the 1990s, he heard a lot about accepting those who were different from you. The reality, however, often did not match the rhetoric.

â€œYou couldn’t be openly gay or talk about something like being transgender,â€ he recalls. â€œI wanted a community to connect with, but I didn’t have this resource until I went to college. I wondered why we couldn’t have more.

These days, Michael helps create an open and welcoming community for students at Alyssa Burnett Adult Life Center and inpatients at Seattle Children’s. Its crowning achievement is the Diversity Club, a class at the Alyssa Burnett Center that celebrates diversity and helps students become advocates for equity.

For these reasons, Michael was recently awarded the 2021 Odessa Brown Ken Feldman Award, one of Seattle’s top children’s honors, which recognizes individuals or teams who encourage, promote, and demonstrate compassion and advocacy for all.

Odessa Brown Children’s Clinic helped establish this award in 2006 to recognize individuals and teams who, beyond their formal job description, shape diversity, inclusion and quality care with dignity. A committee administers the award each year.

Michael joined Seattle Children’s in 2005 as a pediatric mental health specialist in what is now called the Psychiatry and Behavioral Medicine Unit. In 2012 he graduated from Art Therapy and two years later moved to the Alyssa Burnett Center as an instructor, where he incorporated art therapy into his classes.

Since 2018 Michael has been an art therapist at the hospital, working primarily with inpatients in the cancer care unit. But his passion for working with adult students at the Alyssa Burnett Center is so strong that he continues to teach there one day a week.

â€œWorking in mental health is different from working with chronically ill children,â€ he said. â€œThis balance is really important to me, and that’s part of why I still work at the Alyssa Burnett Center. You celebrate things differently and are challenged in different ways.

â€œStudents call it their college or their school,â€ Michael said. “We try to honor that and give them the best education possible.”

One day, a student introduced himself as transgender in one of the classes at the center and asked to be called by a new name. While most of the students were supporting their classmate, one student and her mother were upset. Children’s explained our organizational values â€‹â€‹to this family and supported the student who came out.

â€œIt made me think gender is such a confusing thing,â€ Michael said. â€œA lot of people with autism think in binary terms, but gender for a lot of us isn’t binary. So I wondered how we could have this conversation and teach students what this thing they might think is. black and white actually has shades of gray. At the same time there was so much other stuff going on in the world: COVID-19, George Floyd and Black Lives Matter. I was wondering how we could have these conversations and create a safe space for students. â€

These reflections inspired Michael to create the Diversity Club in the spring of 2021. The Diversity Club is a quarterly course where students explore different aspects of identity and diversity, learn about current events and important movements in history. , engage in creative endeavors and activism, and celebrate all aspects. diversity as they learn to stand up for themselves and others.

A quick glance at the course syllabus shows that few topics are off limits. Sessions include â€œCelebrating All Abilitiesâ€, â€œLet’s Talk Race and Racismâ€, â€œExploring Genderâ€, â€œCruising Cultureâ€, â€œPrejudiceâ€¦ What is it? And “How to make political art”. Although many sessions include artistic activity, much of it is discussion-based.

â€œThere is so much positivity, connection and respect,â€ said Michael. â€œStudents ask questions, share their experiences, empathize with each other, and thank each other for sharing. “

The Diversity Club was also rewarding for Michael and Kayla morrisey, the class assistant who supports the class.

â€œI love the Diversity Club,â€ said Michael. â€œIt has been one of the most positive things about my time at The Children’s. The kindness, curiosity and decency of these students are truly inspiring.

The Diversity Club was so successful that Michael developed a similar class for hospital inpatients called Art and Advocacy. The class explores a different topic each week and incorporates an art project into each session. Since it may be more difficult for inpatients to engage in activities than it is for students at the Alyssa Burnett Center, Michael said art and advocacy have had mixed results. However, he and the entire Creative Arts Department are committed to identifying the barriers hospital patients face and adjusting the classroom to better meet their needs.

The students of the Alyssa Burnett Center have touched Michael deeply. Unfortunately, resources become scarce for people with autism spectrum disorders and developmental disabilities as they become adults. Michael wants to change that, and he reminds us that our understanding of diversity must be broad in order to achieve equity.

â€œIt’s important to talk about neurodiversity,â€ he said. â€œAt the Alyssa Burnett Center, I have students of all races, genders, and sexual orientations, and they also have developmental disabilities that put them at a disadvantage in accessing resources. It’s an important part of the fairness conversation for me.

Michael appreciates the children’s investment in the Alyssa Burnett Center and his support for the Diversity Club. It is also fortunate that Children’s is grappling with its own inequalities and is devoting so much energy to anti-racism and equity, diversity and inclusion efforts.

â€œIt has been a challenge for everyone, but I love that the conversation takes place and that it is a daily dialogue,â€ he said. “I think this is a positive step, although there is some pain that accompanies this growth.”

“Work of the soul”

A student artwork from the Diversity Club at Alyssa Burnett Adult Life Center.

Despite his substantial efforts to promote equity, diversity and inclusion at The Children’s, Michael was still surprised to receive the Odessa Brown Ken Feldman Award. Being widely recognized for the Diversity Club was particularly meaningful.

â€œI feel very honored, flattered and humbled,â€ he said. â€œThe Diversity Club is more than me, it’s made for students and it’s really important to them. I am really happy that this is recognized.

Even more, he appreciates that the award recognizes members of the frontline workforce and their importance in creating a more equitable and just organization.

â€œItâ€™s hard and difficult work, but itâ€™s also emotional work,â€ said Michael. â€œI love that Children’s recognizes that a lot of diversity work is done on the front line.