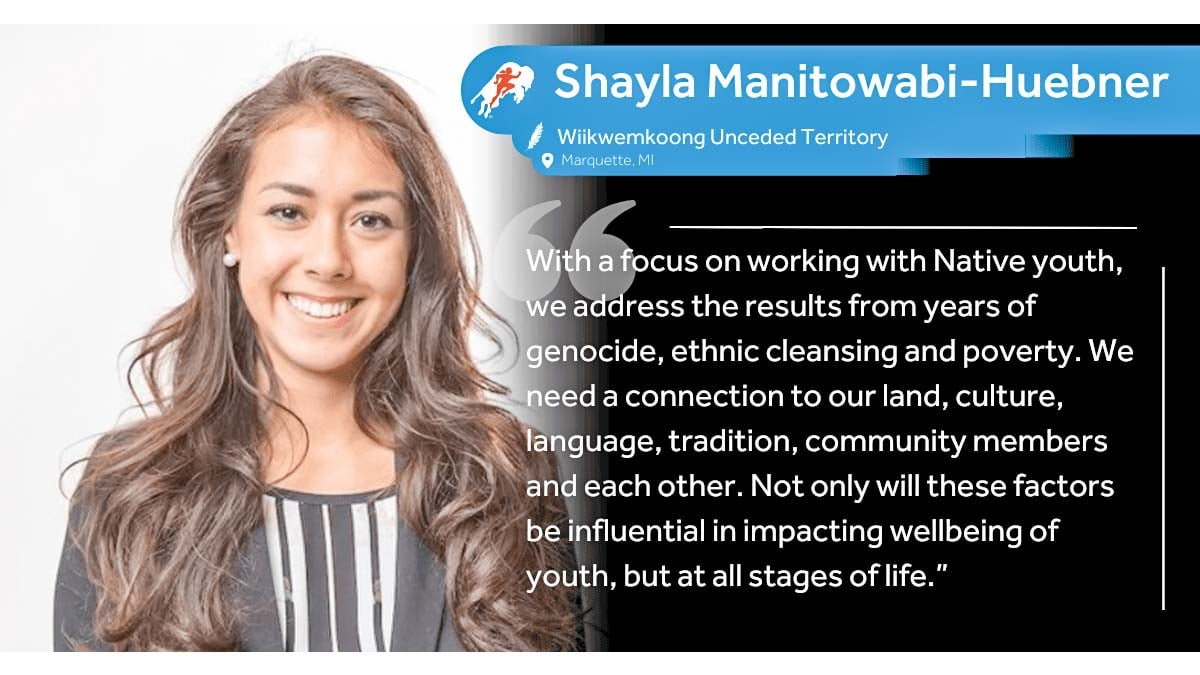 A runner from Wiikwemkoong will participate in the Boston Marathon

UTAH – Although she has done middle distance and cross country in the past, Shayla Manitowabi-Huebner will now run a marathon, the prestigious Boston Marathon, in a few weeks on the Native Women’s Running Team the United States. .

“No, I’ve never run a marathon,” Ms. Manitowabi-Huebner (who was born and raised in Michigan and is a member of Wiikwemkoong Unceded Territory) told The Expositor last week. “I used to run in middle distance events when I was in school and doing cross country. I also ran in college.

“When I first started running long distances, I was training to run 10 to 12 kilometers,” Manitowabi-Huebner told The Expositor.

“Then, on a whim, I applied for the Indigenous Women’s Running Team and was selected to be part of the team that will compete in the Boston Marathon,” said Ms. Manitowabi- Huebner. “It’s going to be a new experience, running a marathon.”

“For the past 5 to 8 weeks, I’ve been training to run 26 miles of a marathon,” said Ms. Manitowabi-Huebner, who was born in Michigan and has spent most of her life there. She pointed out that she has relatives who live in Wiikwemkoong.

Ms. Manitowabi-Huebner, who just turned 25, explained, “The Aboriginal Women’s Running Team is a non-profit organization whose founder, Verna Volker, started her own Aboriginal women’s running team to increase visibility and representation, including Indigenous women in operation.”

Trail Runners magazine reported that Ms. Volker “has gained a following as a working mom-runner who is deeply committed to her Indigenous community. Along with Verna, the Boston Marathon team will include Shayla Manitowabi-Huebner of Wiikwemkoong (Odawa), Samantha Noyce (Navajo), Angel Tadytin (Navajo).

The magazine’s story continues, “One thing is certain, Verna and her team are just getting started. Beyond Boston, they’re using the race as a platform for representation and real, tangible change.

“My goal is to build teams around races and not have to wait to be invited or worry about being tokenized when we are invited. White supremacy is always an issue so we have to take the lead Ms. Volker told the magazine.

“Last May, I graduated from college with my master’s degree in exercise science,” Ms. Manitowabi-Huebner told The Expositor. “I received a $10,000 grant through the Running Strong for American Indian Dreamstarter program, which I am currently working on. With a focus on working with indigenous youth, we address the results of years of genocide, ethnic cleansing and poverty. We need a connection to our land, our culture, our language, our traditions, community members and each other. Not only will these factors influence the well-being of young people, but all stages of life.

Ms. Manitowabi-Huebner’s dream is “Running into Culture,” a culturally appropriate running program for Indigenous youth that incorporates a holistic, community-based approach to promoting healthy behavior. She will lead running workshops and sessions open to all ability levels, including teachings on running history, culture, country food, exercise, nutrition, mental health and spiritual and basic language. Each runner will receive running shoes, t-shirts, socks and traditional food as a snack after the session and the end of the program will include a five kilometer run/walk.

“Running into Culture” will provide young people with the opportunity to experience personal and cultural growth,” said Ms. Manitowabi-Huebner. Its goal is to reduce rates of obesity, prediabetes and suicide among Aboriginal youth, as well as to increase mental well-being, personal identity and cultural connection. During her graduate studies, she developed culturally relevant obesity interventions for Native American Midwestern youth with traditional dance YouTube videos called “Powwow Sweat”.

“I wanted to connect my passions for exercise, health, and helping others in my education,” Ms. Manitowabi-Huebner told Running Strong. “Then I thought of applying what I had written in my research to a running aspect. “As my cultural journey and relationship with running continues to grow, I have learned how essential running is to the Indigenous way of life. She added, “By focusing on working with indigenous youth, we are addressing the results of years of genocide, ethnic cleansing and poverty. For our Indigenous youth, we need a connection to the land, culture, language, tradition, community members and to each other. Not only will these factors influence the well-being of young people, but at all stages of life. »